It wasn’t long ago that we as photographers longed to be able to shoot weddings without flash or any type of external lighting. Hell, being able to shoot anything during the ceremony (if it was at night) without a flash was pretty much impossible because of the limited lighting and horrible ISO range most cameras produced. As Nikon’s flagship line progressed, I had the opportunity to play with a couple of the cameras (Nikon D3s and D4) and each iteration was better than before, but just as I thought it couldn’t get any better, they drop the Nikon D5 in 2016 and blow us all away, once again! 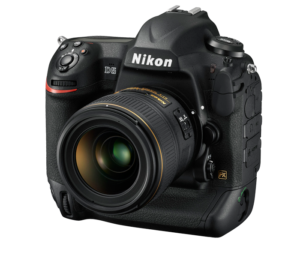 If you’ve played with the Nikon D4 or even the D3s, you’ll feel right at home grabbing onto the D5 and giving it a whirl. While a lot is the same (and that’s not always a bad thing), there’s also a lot that has changed on the D5:

Button Layout – If you’re at all familiar with the past cameras, you’ll find that the new button layouts may leave a little to be desired. Nikon wanted to make the D5 more ergonomic and seems to have changed the layout of things. Most pros are going to pick this baby up and pre-configure the layout and buttons to how they previously setup anyway, so it isn’t that big of an issue.

Improved ISO – How about a max ISO setting of 3.2 million? Yes, you read that correctly. While we would never recommend shooting at the very max ISO setting, just know that it is there and available if you ever need to use it, but expect your images to come out pretty grainy and lifeless looking.

Active AF Points – The Nikon D4s rocked 51  autofocus points, while the new Nikon D5 has a whopping 153 cross-sensor auto-focus points. Expect to get a greater number of shots in focus and less time trying to frame your shot or missing a shot because of it.

Increased MP – The Nikon D4s had 16mp while the D5 is boasting a 20.8mp sensor. This is going to give extra room for cropping images and higher overall quality. While there’s a slight increase in image size, for the average pro user such as a wedding photographer, nature or sports photographer, you’re not going to see much difference in file storage necessities.

With that being said, I give the Nikon D5 two thumbs up. It’s a great camera if you can swing the extra cost, but it may not be a necessity if you are coming from a D4s. Nikon is doing amazing things with all of their line of cameras and I can’t wait to see what the D6 will bring us.

Have you tried the D5? If so, let us know in the comments below your thoughts!